Sugarloaf was the race where I was finally going to break 4 hours in the marathon. Spoiler alert: it didn’t happen. I did, however, come away with a bigly PR of 27 minutes and 53 seconds, which I am super happy about, but it is tempered by the disappointment of missing the 4-hour goal by 15 minutes and 8 seconds.

The training
I dove headlong into training for Sugarloaf after blowing up at NYCM in November. I got myself a coach, cleaned up my diet, and set my sights on running a huge PR. My PR was 4:43:01, so going from that to sub-4 seemed like a huge jump that probably wouldn’t/couldn’t be done over the course of one training cycle, so “huge PR” was my official goal at the beginning of my training. I had never trained through the winter for a spring marathon, and I hated all of the cold windy runs, but I only resorted to the treadmill twice because of snow and my only missed runs were due to physical ailments and not the weather.

The training itself went really well. As the weeks progressed, so did my training paces, as prescribed by my coach. I was intimidated by the paces at first, but since my training was based on science and my actual previous race performances, I figured who was I to argue, and I actually hit all of the paces. I did tempo runs, 400 repeats, 800 repeats, mile repeats, and long runs with MP miles in them, all things that I wasn’t sure I could do until I actually did them. I felt more confident as the training cycle wore on and I was running faster and stronger than I ever had before, and I started to believe that sub-4 was a reality at Sugarloaf. I placed in my age group in a small local 5k and I got a half marathon PR in a train-through race, and then I set unofficial 10k and half marathon PRs in my final long run, so my confidence was super high coming into race weekend.

Race weekend
JP and I drove up to Maine on Friday. The scenery was beautiful, and Sugarloaf Mountain

is so remote that you barely get a cell phone signal. We stayed at the hotel on the ski mountain, which was convenient since that’s where packet pickup, the pre-race pasta dinner, and shuttles to the start and back from the finish were located. We had a crappy dinner in the understaffed hotel restaurant that was full of other runners and then fell asleep in our room watching TV.

Saturday morning we were up early for a 2-mile shakeout run. We ran a mile down the road (it was all downhill), but on the way back we took a side road so that it wouldn’t be a full mile back up the hill. We ate breakfast in the again understaffed hotel restaurant full of other runners, and then we drove the course. Big uphills in the first half, downhills in the second half but more uphill than it shows on the elevation profile. We then spent the rest of the day driving around seeing what there was to see. We had lunch in a hole-in-the-wall general store/restaurant which was surprisingly good. Then back to the hotel for packet pickup and pasta dinner. Then it was back to the room to set out gear and set the alarm for a quite reasonable 5am wakeup call.

We caught the shuttle to the start at 5:45, getting there about 45 minutes before the race started at 7. We jumped on a warming bus, one of several buses that had their heat going full blast for runners to hang out in before heading to the start. Best idea ever! We hung out there for about 10 minutes, I tied and retied my shoes a hundred times, and then we hit the porta potty line, checked our bags, and it was time to line up for the start. There were about 700 runners, but it never felt crowded and the race was so well organized that the start was extremely smooth. The cannon sounded, and we were off!

It was chilly for the first few miles of the race, probably in the upper 30s. I was in a singlet and shorts, and I wished I had kept my gloves because my hands were numb. It was shady for first few miles and then we broke out into the sun, at which point I was happy I didn’t keep the gloves. I followed my race plan of starting out at a nice easy pace for the first two miles, then slowly speeding up to MP over the next 4 miles. By mile 6 I was at marathon pace, but I knew that the biggest inclines of the race were between 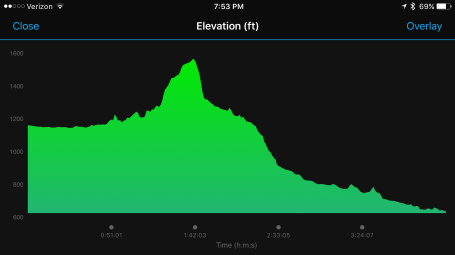 miles 7-10 so that my pace would dip there. For the first big hill I tucked in behind a guy and a girl who took a selfie in front of me (I photobombed them) and kept pace with them up the hill. They stopped at the water stop at the crest of the hill, so I kept going up the second hill, which was less steep but longer. I kept a steady pace, and I was even passing people. I topped second hill and prepared for the downhills that were coming. I thought to myself “the hardest part of the course is over,” and then I thought, “whoa, check yourself there missy, you still have 16 miles left.” <–Foreshadowing. I ran pretty controlled on the first steep downhill, then let gravity be my friend and pull me down some of the other hills. There was a lot of “up” in this section too that you couldn’t really see on the course map, but I felt like I was running pretty evenly. At one point I thought to myself that my effort felt too hard for that point in the race, and I heard my Garmin beeping at me for running too fast, but I figured I was just getting some of the time back that I gave on the uphills. <–More foreshadowing.

I had been running through all the water stops and getting two cups of water at each one since it was getting warm. One cup on my neck and down my back, the other cup to drink. At mile 17 I decided to walk through the water stop because both of my hips hurt, and that seemed to reset me and I kept going. After my gel at 19.5 though, I started to feel twinges in my right foot and calf. I slowed down to hold off full crampage, but then just past mile 20 both the foot and calf fully cramped. I pulled off to the side of the road and stretched, and then walked out the cramps and kept running. I walked through all the water stops from there to the end, and I pulled up and stretched and walked when my foot or calf cramped again. When I was running I was keeping a good pace and passing people, but then I would cramp again. Fortunately it wasn’t the relentless cramping I experienced at NYCM, and also fortunately it was only on my right side and not both legs. But unfortunately it totally messed with my head and I started thinking that I wasn’t meant for marathoning and I should just quit and who was I to think that I could break 4 hours in the marathon, especially this one with all the big hills? I actually told myself out loud to pull myself together and get through the race and then I could feel sorry for myself.

I was helped a lot through this part of the race by seeing this couple who was cheering on their daughter at every other mile marker. I was just ahead of their daughter the whole time so I saw them several times during this difficult stretch and they cheered for me each time. They were so encouraging and it was just nice to see friendly faces when I was feeling so low. I had the worst of the cramps literally at the 1 mile to go mark, and a number of runners encouraged me while I was walking out the cramp. Since there’s no walking in the final mile of the marathon, I ran the entire last mile with my calf and foot on the verge of cramping again. I saw JP just before the finish, and I tried to kick it in when I saw the cheering dad again who told me that he knew I could do it with a huge smile on his face, then finally reached the finish line, crossing at 4:15:something and knowing I had completely blown my sub-4 goal.  I got my medal and dissolved into tears. I just needed to get the frustration out, knowing I had trained my ass off for 6 months, and knowing I had sub-4 in me but my stupid body betrayed me again. Once I was done with the tears, I tried to do math and realized I had an almost 28 minute PR!! My final chip time was 4:15:08 for a 27:53 PR.

My watch also recorded 10k and half marathon PRs on the day as well.

Post-mortem
I am proud of how I ran the hills at the beginning of the race and how I thought I had run a smart race. Looking at my Garmin immediately after the race, it initially looked like I executed my race plan pretty well:
Miles 1-2: 2 mi w/u at easy pace . Right on pace.
Miles 2-6: gradually speed up to MP:  10:01, 9:53, 9:43, 9:12. NICE.
Miles 6-16: keep even pace through the half to mile 16 . I felt like I was running evenly, and the average pace is just under MP. I realize that includes the uphill miles but I still thought it was pretty good.
Miles 16-20: see how you are feeling, speed up if you feel good. This is where the slowdown started.
Miles 20-23: re-assess at mile 20. And now the cramps.
At mile 23, bring it home for last 5k . Yeah, not so much.

So, yeah, I ran 6 miles in a row AT OR BELOW MY TEMPO PACE in the middle of the race. No wonder my calf cramped and the wheels fell off! I thought I was running controlled, but I should have kept a closer eye on my pace and slowed it down to MP or just a bit faster, not 30+ seconds per mile faster. Lesson learned.

So what’s next? I’m enjoying some recovery time, but Chicago is in 20 weeks and I will start training for that in a few weeks. I fully expect to crush this new PR and the 4-hour mark in Chicago, and I will be sure to run a much smarter race then. 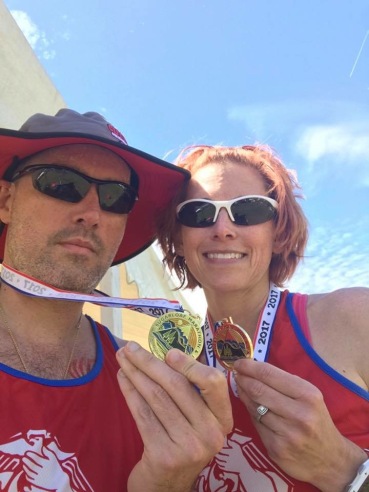