Coming off of a disappointing Chicago Marathon in October, I was determined to have a great spring race and break 4 hours. B&A Trail Marathon seemed to be the perfect choice: flat, fast, and in a state that my husband hasn’t already run in. The timing was perfect too, allowing me to put in a solid 12-week training program after a half marathon PR in December and a month of easy running.

Training
Winter training wasn’t too bad this year: I only had to resort to the treadmill twice due to the weather. Yes it was cold and windy and awful, but I hit most of my workouts despite that. I also did a 5k race series during training in which I ran a hard 5k on the Sunday after a long run on Saturday. Each 5k got faster even as the long runs got longer, and I got a huge confidence boost in winning my AG in each race and the overall series (it was a small series, not many in my AG). Most of my workouts leading up to the race were in line with where I needed to be, and I felt confident and strong going into race weekend. 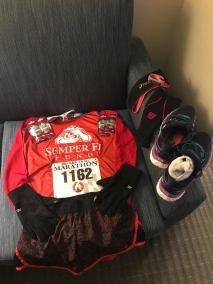 JP and I drove down to MD on Saturday, hit the expo and then a local place for lunch. We chilled most of the afternoon and then found a Noodles and Co. for dinner. I had the same pre-race dinner that I had before Chicago, but I knew that my race would be much different. Flat Martha made an appearance Saturday night, with shorts and calf panties since it was supposed to feel like upper 30s throughout the race, with little wind. We went to bed between 10 and 11, with a very reasonable 5:45am wake up time. I didn’t get much sleep, but I was ready to go when the alarm went off.

Race day
Race day dawned much colder and windier than expected with windchills in the 20s, so I opted for my leopard print tights instead of shorts. We drove the 15 minutes to the start and waited in the high school for about 10 minutes until it was time to line up. I kissed JP good luck and lined up at the 9:00 sign. Before we knew it, we were off.

The race had about 450 people in the half and 225 people in the full, so the first half of the race was crowded and didn’t thin out until just before mile 13 where the half marathoners peeled off. With the exception of the first mile and the last quarter-ish mile, the entirely of the race was run on the B&A Rail Trail, a paved multi-use trail that used to be a railroad. As such, the course was mostly flat (with the exception of a few overpasses) and fast. It turns out it was pretty cambered too. (<–this is foreshadowing). The course started in the middle of the trail and went out one direction for 6.5 miles to a turn-around, then back to where we started, the half marathoners split off and headed back to the finish, and the full marathon continued out the path in the opposite direction for 6.5 more miles to another turn-around and then back to where it all started. It was a really nice course and it was fun to see the some of the same people twice during the race.

That last mile was a bit fast, but we were on a long downgrade (not enough to even be called a hill), and I had latched onto 2 other women who were running at about my same pace, so it didn’t feel too fast. I stayed with them to the turn-around then passed them and kept churning out the miles: 8:45, 8:41 (I thought maybe I should slow down here), 9:09 (ok so maybe I overcompensated a bit, let’s speed up again), 8:56 (perfect), 8:50.

By this time I was going back and forth with a guy who DID NOT want me to pass him. We were going at about the same pace, and every time I sped up to do some of the work in setting the pace, he would speed up until he was right in front of me, then settle back into pace. Well alrighty guy, I will just tuck in behind you and let you do all the work. 8:47, 8:55, 9:17

The half marathoners split off and headed back to the finish here, and when I passed the half, I was right on track with 1:57:xx. But I started to feel some pain in my right IT band, so I slowed down a bit to see if that would help. It didn’t. I decided to stop and stretch, thinking if I could just stretch out my ITB then the pain would go away, and it would save me time later in the race. I was able to pick it back up to almost race pace after the first 2 times I stopped to stretch, but the pain kept coming back, more quickly each time, and it kept getting worse. 9:14, 10:32, 9:09, 11:21, 9:11. During one of my stretches, the guy I had been pacing back and forth with passed me for good, and I only saw him again after he had hit the turn-around at mile 19. I wish I had gotten his race number so I could have seen his finish time after the race.

At this point I knew my quest for sub-4 on the day was done. And I knew exactly what the IT band pain was from: a heavily cambered road. The only other times I’ve felt this pain were at Steamtown 2004, when I had it in both knees and DNFed at mile 16, and both times at MCM in the out-and-back on the Rock Creek Parkway. I have never had this pain in training, since I avoid heavily cambered roads. I assume that most of the miles from 6.5-19 (the first turn-around to the second turn-around) was on a reverse camber, since it was only my right knee that was hurting. I knew there was nothing I could do about it, I just needed to finish the fucking race, so that’s what I did. I stopped to stretch every other mile or so, and one time my right groin started cramping! And then my left groin cramped! Dueling groin cramps! That was not pleasant. 12:02, 10:54, 11:37, 10:12, 11:35 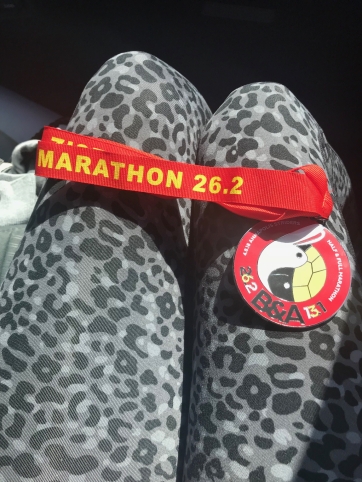 my PR! At the finish the guy taking my tag asked how I felt and I told him, “Like shit, thanks for asking,” and he looked alarmed until I started laughing and told him I was ok. I think he was going to lead me to the med tent.

The major victory for me in this race is that my mind never went to the bad place: the place where I curse myself and my training, ask myself why I even thought I could break 4 hours in the first place, tell myself that I am not cut out for this, and decide to quit marathoning forever. I never went there. My rational mind was there for the whole race: understanding the situation for what it was, shifting my goals to match the situation, allowing myself to be disappointed but knowing this “failure” had nothing to do with my preparation for the race or my race execution. This is huge for me since I struggle with negative self-talk any time something goes wrong in a race.

Also, the calf cramps that have plagued me for my last 3 marathons never hit. Yay!

JP’s race didn’t go exactly as he had planned either (the camber got to him too), but he was only about 5 minutes off his PR, so he was pleased. We chilled for a bit at the high school, ate bananas and slices of Papa John’s pizza, and compared notes on the course. We had both seen a woman spectator with a sign that simply said “Chorizo” which was amusing, and I told him about a dog on the course who had a sign around his neck that said, “Woof.” Both were awesome. We finally made it back to our hotel, got cleaned up, ate a proper lunch at a pirate-themed restaurant, and then spent the rest of the day sightseeing in Annapolis. I was hobbling around most of the day with the sore ITB but otherwise felt pretty good for just having run a marathon.

It’s now 2 days out from the race, and my knee feels 90% better. I have been taking ibuprofen and icing it when I can, and yesterday I got a massage which helped immensely. I have Big Sur to run in just under 3 weeks, but that’s just for fun. Assuming my knee complies, I am going to parlay this training into another sub-4 attempt at VCM in 7 weeks (5/27). I feel like I am RIGHT THERE, I just have to be smart about my race. I think I took my coach’s “if you feel good, go with it” advice too early in the race, and although I don’t think that contributed to my knee pain, I think keeping a lot of those earlier miles closer to 9:00 will be beneficial in my hitting my goal.